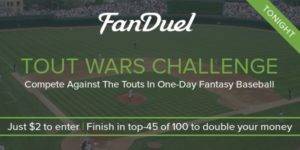 It was an off-week for the Touts which means more of the public doubled up their money, which is never a bad thing. A Tout did record the top overall score as Paul Sporer logged an impressive 70.33 FanDuel points. Joining Paul in the top-ten were fellow Touts Todd Zola, checking in at #6, David Gonos at #9 and Gene McCaffrey, sneaking in at #10.

All totaled, the Tout Warriors captured only 10 of the 45 money spots. Great job by the readers this week!

Madison Bumgarner was on 31 percent of all the teams including that of Sporer, Zola and Gonos. McCaffrey was one of only 5 percent of participants that used Chris Archer.

Sporer went with the herd as 23 percent of the combatants deployed Maikel Franco and his 14.75 along with 23 percent who used Brett Gardner and his 9.5 points.

Follow along with #ToutDaily as we award the next three tickets to the Tout Daily Championship after Friday’s contest has concluded. 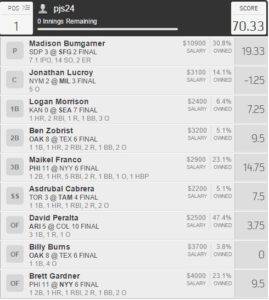 ToutDaily has introduced many of the Tout Warriors to DFS whole providing all of us a chance to match wits with each other. As a means to share some of our thoughts about DFS, its strategies and its place in the industry, each week we’ll be answering a question, to be posted here every Thursday evening. This week’s question posed to the Touts is:

What has surprised you the most since you’ve started participating in the Friday FanDuel Tout Daily contest?

It’s relatively easy to find a pitcher with a favorable match-up and a good chance of earning a Win, but seemingly much harder (judging by volatility in week-to-week results) to find hitters who will do well (even within the relatively small subset of Hitters who appear to have extremely favorable match-ups).

Speaking as someone who had Felix Hernandez for his one-out, eight-run performance at Houston, I’d have to say how much depends on the seemingly random unpredictability of the pitching.

At first glance, my reaction was, “Oh, I can do this.”  However, after over a half-dozen entries, I’ve only had one really good one — and I’m now spending more and more time checking match-ups, weather, and other things I ignored at first.he seemingly random unpredictability of the pitching.

Prior to joining the Tout Daily contest, I really didn’t play daily fantasy baseball. I’m surprised at how little I enjoy the daily game. Fantasy baseball has never been about winning money for me. The draft preparation, executing an effective draft, in-season waiver and roster management, and making trades throughout the season is what I really enjoy. I’d much rather build a team that wins after six months of strategy and tweaking than build a team with the expectation of one good night of production.

Two things have surprised me the most. First, that so many of us have fluctuated from bottom to top so frequently. Second, I find myself spending more time refreshing and checking the standings than actual time I spend setting my lineup. Is that bad? Is there a 12 step Tout Daily rehab program when this is over? Please advise.

What has surprised me the most is the wide swing in weekly scores. Though it is obvious that in each contest, everyone is starting over, there is clearly no halo effect. Despite following the same basic process in roster setting, my results have varied dramatically by week. For example, on May 22, I hit my low-water point, finishing 33rd of 42. The next week, I came in first. I wish I could point to some specific change I made to improve, but I have no explanation.

I knew one thing going in: I knew nothing about playing Daily Fantasy Baseball. But I wasn’t worried, because I also knew the game was subject to a huge variance. As someone who has projected baseball performance for more than 20 years professionally, published ROS updates weekly in the early aughts on MLB.com, and has been around a statistical paradox or two, I thought I would occasionally win simply because I got lucky. In Tout Daily, however, not yet. The sample is still small, just 10 weeks, but as I learn more about the game and fail even worse, I’m thinking it isn’t DFS, it’s me.

Nothing has surprised me. The competition figured to be tough and it is. I consistently make good picks and a few other people make them and one more. The touts are better players than the public, which I know because several of my identical teams have cashed in tournaments but not in the Tout Challenge. This contest consistently makes better picks, the top players that night are almost always more widely owned, sometimes a lot more. This is especially noteworthy on Fridays when all teams are playing, which adds choices and don’t forget randomness.

Competing for 1 day may be fine, but having standings, automatically creates a new level of competition and excitement

I have mostly found it sort grounding in DFS that it remains as mysterious and fickle as its on-field counterpart.

No sure things (King Felix goes .3 and is tagged for 8? Jace Peterson bags 15 points to Stanton’s 0 thanks to a walk?

It just reminds me there is indeed some theoretical comfort in a body of stats, but in a microcosm the numbers mean very little as often as not.

I’m not surprised by it any longer, but early on I was intrigued to see that my lineups built around a star pitcher generally performed better than those that invested heavily in hitting. It might be counterintuitive to full-season fantasy games, but it makes sense in a daily format. Every pitcher in the league is going to have his share of bad outings, and, of course, they’re more susceptible to injury, but it’s a whole lot easier to predict pitcher performance when you know the hurler in question is healthy and has a beneficial matchup. Hitters with even the best matchups are going to fall flat from time to time. Just earlier this week Kris Bryant didn’t get a meaningful hit in the Cubs’ 17-0 drubbing of the Indians until outfielder David Murphy was on the mound. Since about the middle of April, I’ve put my trust in pitching, and it has generally worked out for the better.

For me, it has been the extra level of analysis and strategy involved in daily fantasy games. It’s not simply selecting names to fit the salary cap. Every roster move counts as we are not only competing each Friday night, but also for finishing in the top 3 overall in the 4 week competition for a ticket into the finals. I’ve had the opportunity to try different strategies such as studs and duds, or going all in on either starting pitching or hitters. Some strategies work better for me than others. I also do a deeper analysis on weather, hitter versus pitcher stats, and hitters that have been hot over the last 7 days. Last but not least, I set my initial team, but always follow up at least 30 minutes before the contest closes to ensure that my players are actually in the starting lineup, especially for players with lower salaries that may not be starting that day.

Experts, there are no experts in DFS.  Yes some seem to do better than others, but on any given day anyone can win, and anyone can have an awful day.  There does not seem to be any secret sauce (As Ron Shandler stated), which makes the game really interesting.  Picking the right pitcher, one who will get at least 15 points, is imperative.  I do not think we have had a daily winner who has not had a pitcher earn at least 15 points.  Keep trying should be the advice.  There’s really no reason that today won’t be the day you win!

Nothing has really surprised me. What has been special to watch, though, is how well Lenny Melnick has done at times. A legendary seasonal player and analyst is paving the path for hardcore seasonal players to embrace DFS rather than shun it.

It’s going to sound conceited, but let me explain. Not much has surprised me, but it has surprised me how much everyone tends to lean on high-priced pitching. I’ve been doing a study cataloging similar lineups using the top tier of expensive pitchers versus the second and third tier guys. I use the savings to invest in better bats, and it’s performing significantly better. I’ve seen about an 11-12 percent boost on average by avoiding the extremely expensive pitchers, which can make the difference between in cashing out on FanDuel. I assumed that many of the Touts would have a similar theory, even though many are just getting into the daily game. I think the allure of “safety” at pitcher is more perception than reality, and I expect more Touts, and DFS players in general, to start moving away from the extremely expensive pitchers to build better performing lineups.

I know this sounds a bit self-centered, but I’m surprised at how poorly my performance has been in ToutDaily, at least relative to my results outside of the FanDuel contest. Wise Guy Gene correctly pointed out we have some very sharp players here but I also wonder if I’m overthinking things, trying to get too cute with my lineup since it’s a hybrid format between trying to win the week and qualifying for one of the 15 spots in the Tout Daily finals.

Tuesday was one of the highest scoring nights of the season as kramerb led the pack with an impressive 79.75 points. The cutoff to cash was a rather high 41 points.

Jake Ciely was the only Tout to finish in the top-ten, checking in at fifth. Eleven Touts cashed:

Trevor Bauer (15% ownership) was on three of the top five finishers including leader kramerb. Top Tout Jake Ciely used Garrett Richards (23%) with Chris Tillman (7%) being the other pitcher used in the top five.

With so many MLB teams scoring so many runs, it was going to take a stack or two to come out on top and kramerb nailed it with some exposure to both the Pirates and Orioles then filled in the blanks with Albert Pujols. Jake focused on the same teams except he didn’t use Manny Machado or Francisco Cervilli, two keys to kramerb’s top scoring unit, shown below: 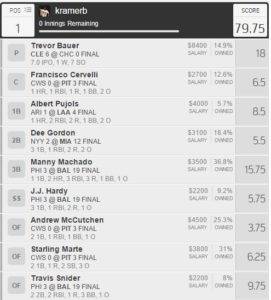 Steve Moyer was the top Tout in last week’s #ToutChallenge on FanDuel. Nine other Touts finished in the money which left plenty of opportunity for you to pad your bankroll.

Are you up for this week’s #ToutChallenge?

For just $2 you can match wits and talk trash with your favorite Tout Warrior. Finish in the top 45 of the 100-player field and you double your money and ooze with pride.

To see who the AL, NL, Mixed Auction and Mixed Draft Tout Warriors picked up for the home stretch, click HERE.