Join along with Justin Mason for a chat following this year’s auction. The chat should start at about 9am EDT.

The live spreadsheet is right here.

It is always a challenge when you sit down at the fantasy baseball auction table with the best of the best. Of course, that is why we love Tout Wars. 2018 was very very good to team Colton & the Wolfman as we managed to take home our second AL title in 5 years. In 2018, Team Colton and the Wolfman made one change to the auction approach — rather than go value hunting in the middle and late rounds (i.e., bidding on anyone who is being priced below our predicted value), we had our list of mid-priced and low-priced guys we really liked and tried very hard to stay on track and get players from that list. Well, since we won both Tout Wars AL and Doubt Wars AL, I guess it worked (despite spending $30 on Gary Sanchez who hit well under the Mendoza line and $20 Robbie Cano who got suspended for half the season)

That we grabbed guys like Jose Ramirez and Andrew Benintendi is nice but hardly genius. The guys at the lower tiers we liked and grabbed were such “household” names as Kyle Gibson (3.62 ERA and 179K for $2); Matt Boyd (159K and a 1.16 WHIP for $1); Keona Kela (24 saves for $1); Marcos Gonzales (13 wins, 1.22 WHIP for $3). That was where the rubber met the road for us in 2018. You do your studying, you figure out who you like and you go get them! Of course, when you play against the best in the world, you also have to be lucky and this year, we were (when we traded Vlad, Jr. to Chris Liss for ERod only to have Vlad get hurt a short time later). I am sure Chris will forgive us for that (nah, he won’t).

Sadly, no review of 2018 would be complete without recognizing that we lost a very special member of the fantasy baseball community when Steve Moyer passed away unexpectedly in March. His skill, humor, and humanity will be sorely missed. That his good friend and fantasy baseball great Doug Dennis was the one to stand in for Steve and auction in his spot was appropriate, sad, touching and uplifting all at once. Doug showed composure, compassion and Moyer-like humor that day in March under very emotional circumstances which only left us even more impressed with Doug than we already were. Bravo to our friends both still with us and alive in our memory.

To end on a lighter note — as much as we admire Doug (and we do), we are still a little sore he bid $2 to steal Melky from us just because he knew it would get a roar. Of course Moyer would have loved the move!

My story starts in early March when Steve Moyer died.  It made the entire 2018 season very strange/odd/bad for me.  The high point was probably drafting a Tout-AL team in his place and I wish I had done him more justice.  The projections after the draft (but before the season started (from both “Toybox” sources on the onroto.com website) projected me to come in first.  But I could hear Steve’s voice in my ear: “Oh no, Doug you did it all wrong!!  No one ever wins after being projected first!!” Probably true, too. I had very terrible pitching from Marcus Stroman, Mike Leake and from assorted relievers early on and I could never scramble it back into anything useful.  I won’t be as patient next time.  I did ok on offense at first, with the worst part there being Dee Gordon cratering and having to trade him at a discount and letting go of incremental SB points. It all led to me staggering around between seventh and ninth until the final week where I free-fell into a tie for tenth. Ugh. All around, a poor season, but I am hoping to be invited back in 2019 so I can get back on the horse—perhaps with a little less emotion this time. 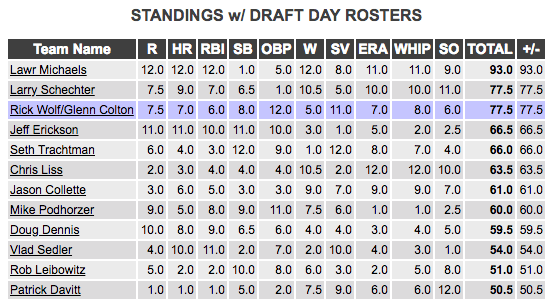 Scott Engel and Steve Moyer bonded over their love for the band KISS’s first album. When Steve died recently, Scott put together a tribute.