Phil Hertz may have dominated the Tout Daily field in season, but Derek VanRiper topped the 10 team field in the weekend’s three day contest, earning the Tout Wars Daily 2019 championship. 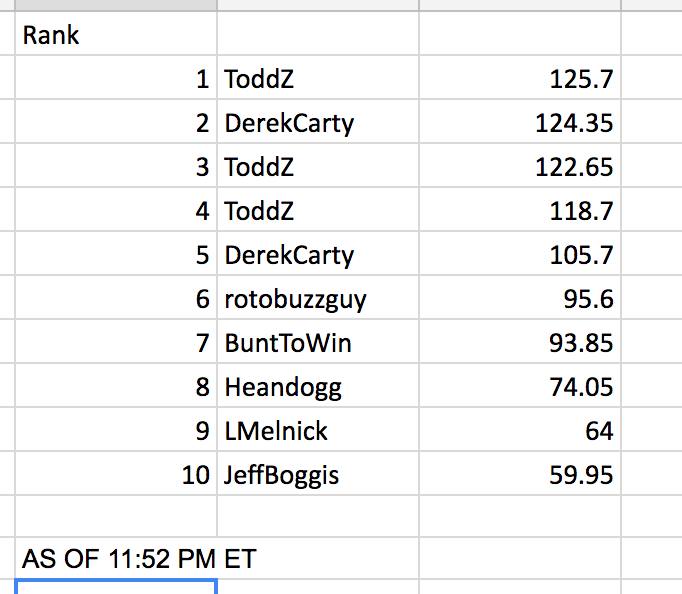 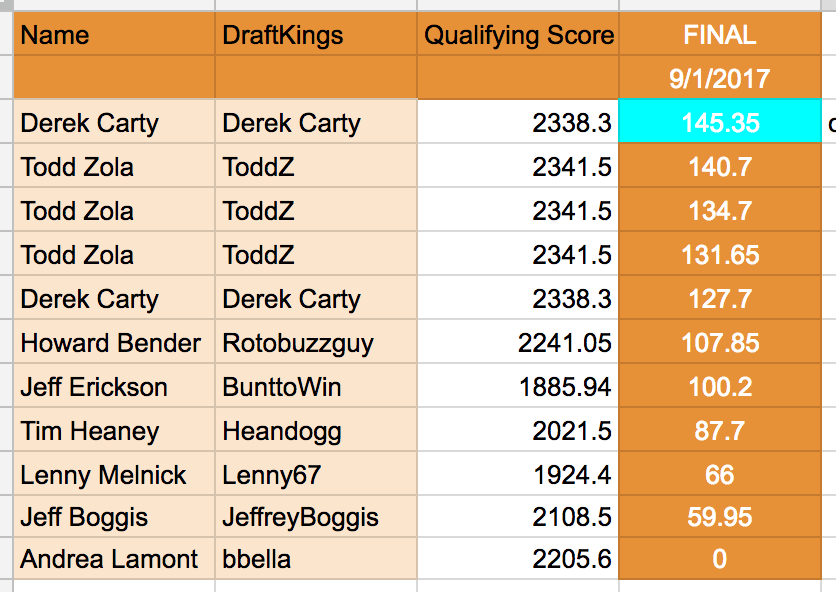 The final night of the 2017 regular season went to Jeff Boggis, but as the night’s games finished two winners emerged in Period 5 of the contest: Derek Carty and Tim Heaney. Each adds a ticket to the finals, to be held next Friday, September 1 on Draft Kings.

Todd Zola has three. He also won the Most Overall Points ticket by three points over Derek Carty.

Howard Bender has one.

Andrea LaMont has one.

Jeff Boggis has one.

Jeff Erickson has one.

Lenny Melnick has one.

Tim Heaney has one.

Good luck to the finalists on September 1.

The full leaderboard is here.

Derek Carty leads for a second golden ticket, but there is a crowd chasing him. See the leaderboard here, and look for the winners of the last three tickets in this space on Saturday.

Tim Heaney is in the lead. Steve Gardner and Ray Murphy, Derek Carty, Derek VanRiper and Todd Zola are all within shot of a first or second place finish to earn a golden ticket to the September 1st finals, when this year’s Tout Daily champion will be crowned.

Tonight’s contest is Week 3 of Period 5 in this year’s season. The Tout are picking:

My top hitter for tonight’s #ToutDaily contest is: Giancarlo Stanton (MIA – OF) at NYM $5,700. Giancarlo Stanton had his 6-game home run streak snapped yesterday, so it’s time to start a new one beginning tonight. He faces Mets pitcher Chris Flexen and his 7.02 ERA and 2.10 WHIP. Stanton is hitting .286 with 34 home runs and 69 RBI against right-handed pitching this season. Over the past week, Stanton has an OPS of 1.659.

Corey Kluber and Yoenis Cespedes. Kluber’s recent record speaks for itself; Cespedes is heating up and facing a lefty.

PITCHER No-brainer for me, Max Scherzer ($14,100) is the clear-cut choice for my SP1. I’m most interested in protecting  my 34 point lead for the overall points title so there’s no reason to take chances. The match-up and weather both favor Scherzer over Kluber. That said, I’m still flummoxed over my SP2. It may come down to lineups and late weather scenarios.
HITTER Because I don’t know where I’m going with SP2, my hitting roster is in flux. A couple names I’m strongly considering include Neil Walker ($4,500) facing German Marquez in Coors and Shin-Soo Choo ($4,300) squaring off with James Shields in Arlington. Both should be hitting second in great hitting environments, in contests with no weather concerns.

Tim Heaney did not finish in the Top 5 in Week 2 of Tout Daily Period 5, but remains atop the leaderboard by virtue of his Week 1 margin of victory. But right behind him are Steve Gardner and Ray Murphy, each looking for a Top 2 finish in the four week contest and a ticket to the September 1 finals.

Sitting in fourth place is Week 2 winner Derek Carty, who—along with Derek  VanRiper and Todd Zola—is within shouting distance with two weeks to go. Carty’s victory was built on the backs of Carlos Carrasco and Rich Hill, popular pitching picks who had fine nights, and strong hitting across the board, with Yoenis Cespedes leading the way. 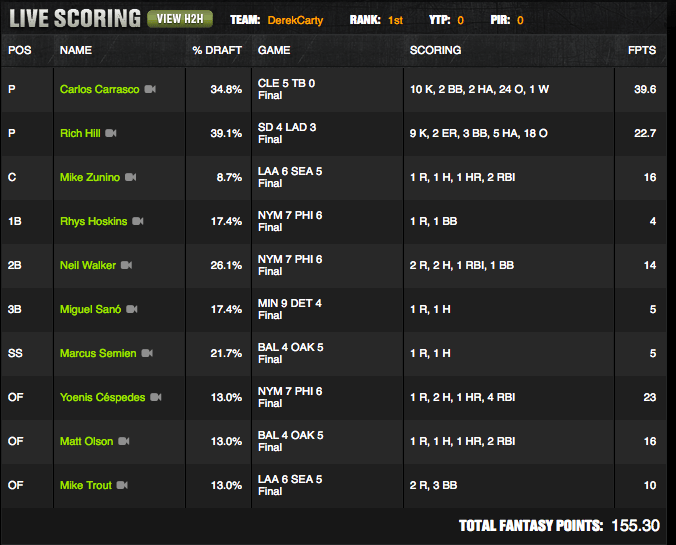 The Touts will be back this coming Friday for Week 3. Look for their picks for Draft Kings that night late on Friday afternoon.

Tim Heaney stepped on it in Week 1 of Period 5, winning handily over the field of Touts in Tout Daily.

Week 2 is played tonight, with the Top 2 scorers from the four-week contest winning tickets to the September 1 final.

Some Touts have sent us their top picks for tonight’s contest at Draft King.

Top Pitchers  I’m going with two “aces” that need to stop their teams losing streaks, so I expect great performances out of both, Jimmy Nelson and Danny Duffy.  Both stand in line for double digit Ks and a Win. Nelson gets Cincy at home,and Duffy gets the “rookie” White Sox team in Chitown.

My top hitter for tonight’s #ToutDaily contest is: Freddie Freeman (ATL – 1B) at St. Louis against Adam Wainwright. You can roster Freeman for $1,000 less than Paul Goldschmidt at $4,700 tonight.

My top pitcher for tonight’s #ToutDaily contest is: Carlos Carrasco (SP) at Tampa Bay $8,900.  Look for him to bounce back tonight after his last two rough outings.

Ubaldo Jimenez ($6500): Deperate times, desperate measures, although to be sure Jimenez has been solid his last three starts and faces the easiest band potential strike out victims than Oakland.

There are at least six SP’s tonight with a reasonable chance to post a 30+-point game. Tonight’s salaries are aligned well with the odds and I’m starting with Rich Hill at the top. Tonight is a good night to enter multiple teams and vary your #2 SP.

Neil Walker woke up yesterday. He faces righty Nick Pivetta and no doubt the highly questionable Phillies’ bullpen at $2700 – a big help in rostering expensive SPs.

Pitcher: Jimmy Nelson – second biggest favorite according to Vegas, should get a good number of Ks.

Pitcher: He’s been scuffling lately, but that’s driven down the price for Carlos Carrasco ($9,700). I like the park upgrade and the strikeout upside, taking on the Rays in The Trop.

Danny Duffy, KC at CWS: Keep picking on the Pale Hose, who develop more holes by the day.

Andrelton Simmons, LAA at SEA: One of the more underrated fantasy bats gets a favorable platoon turn.

Second and third place were claimed by Jeff Erickson, who already has a ticket to the finals, and Ray Murphy, who finished just .55 points apart. The top five was rounded out by Andrea LaMont and Steve Gardner.

LaMont’s strong week moved into second place in overall points for the contest, where she challenges leader Todd Zola for a bonus ticket to the September 1 finals. We’ll follow that race closely in the coming weeks.

You can see the whole leader board here.