Friday night is the final tilt of Phase 1 of the Tout Daily at FanDuel contest.

While any number of teams could finish first and pass the current leaders, the more teams a team has to pass seriously diminishes their chances of finishing in the top 3, each of whom will receive a ticket for the August 28th championship. Read all the rules for Tout Daily here.

Going into the final week, here are your TOUT DAILY leaders:

If Craig Mish were to score our highest total so far, 66, he would finish the week with 178. To knock him from the championships, three of our top eight would need to top 46. It could happen, but it will be tough.

Follow all the action Friday night at FanDuel, by clicking the link: http://partners.fanduel.com/processing/clickthrgh.asp?btag=a_7152b_1016. 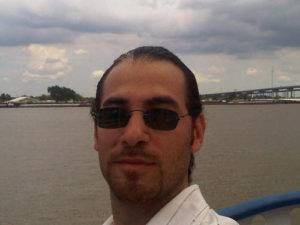 Ronis also won the Week 3 of Phase 1 contest, edging Tristan Cockcroft, who bounced back after two very soft weeks. You can see all the results right here.

Ronis feasted on Gerrit Cole’s fine game versus Arizona and Anthony Rizzo’s monster game in Cincinnati, and generally good performances across the board.

After three weeks of Phase 1, no team has finished in the money (Top 10) more than two times.

The Top 3 finishers in the four-week Phase 1 will get tickets to the Tout Daily championships on August 28th. Ronis, week 1 winner Scott Pianowski, and Jake Ciely are currently in the top three positions. See the complete leaderboard here. 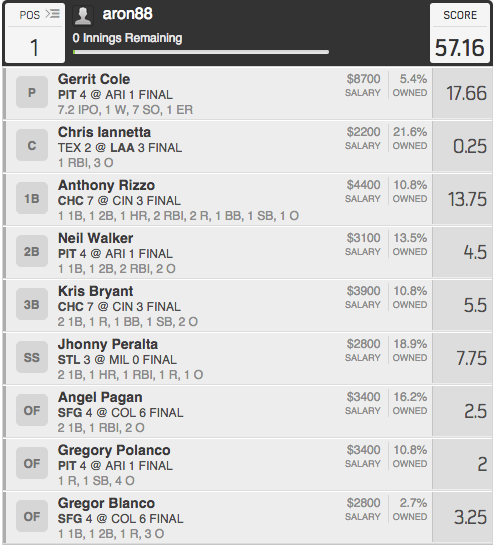 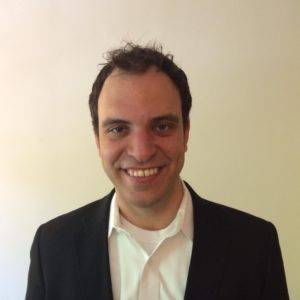 Michael Beller gave it the best shot, landing atop this week’s Tout Daily by Fanduel standings, riding big games from Max Scherzer, Russell Martin and Alex Rodriguez. But Pianowski remains atop the leaderboard after two weeks of play.

Three players, Jake Cieley, Chris Liss and Charlie Wiegert, have finished in the Top 10 in each of game’s first two weeks. Scott Engel has the second best total halfway through Phase 1.

How did Beller do it? 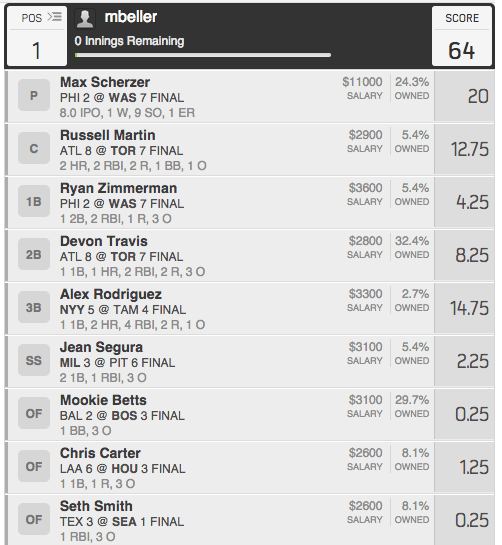 Find out tonight, as 36 Touts chase the leader, in this week’s installment of Tout Daily presented by Fanduel!

And get a preview of who Lawr Michaels is picking at Mastersball.com. 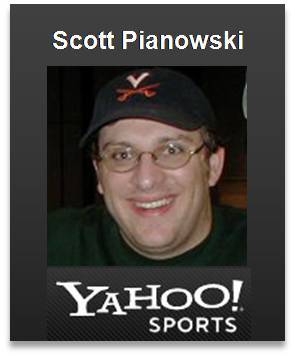 McCaffrey got a fine game out of San Diego’s Brandon Morrow (yes, both leaders went low end on their starting pitching) (14 points), got a monster from the Reds Joey Votto (16.75 points), and a fine game mostly in extra innings from the Red Sox Xander Bogaerts (7 points).

For his success, Pianowski gets $60 added to his FanDuel account, while McCaffrey adds $48 to his. And the two are the leaders in week one of the four week race for eligibility in Phase One of the championship contest, which is to run in late August.

Here is the running LEADERBOARD. Bookmark it!

Here’s this week’s winning roster. Could you have done better? (click to enlarge) 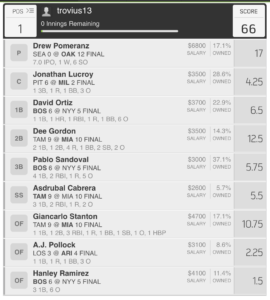 We’re counting down the days to Opening Day, and so is FanDuel. To help promote the Tout Wars Daily game, presented by FanDuel this year, FanDuel is offering a special game on Opening Day.

Sign up to compete against Tout Wars experts Todd Zola and Rotoman in one-day fantasy baseball on FanDuel on Opening Day. It’s just $5 to enter and you can win up to $100. Enter now!

This baseball season, Tout Wars is partnering with FanDuel for a season-long contest open to the touts in all five Tout Wars leagues. Cash prizes are involved. Rules and many more details to follow after Tout Weekend.

In the meantime, sign up to compete against Tout Wars experts Todd Zola and Rotoman in one-day fantasy baseball on FanDuel on Opening Day. It’s just $5 to enter and you can win up to $100. Enter now!