When we announced the Doubt Wars contest in March we knew we didn’t have the proper forms in place, but we were jazzed and excited and wanted to try this out this year anyway. So, we asked you to make up your own teams, using the Tout Wars auction prices plus $1, with a budget of $260, to compete against each other and the Touts.

Given the short notice and the awkward entry process, we were pleased to receive more than 18 AL entries, more than 20 NL entries, and more than 30 Mixed entries.

Our intention was to get all the data into a big spreadsheet and update the results each month. That didn’t happen.

What did happen was a little bit of life, and a lot of learning about data cleaning, not an area in which I have much expertise. The problem wasn’t the errors, really. There were some of those. Some of us (yes, my AL entry somehow went over budget) made mistakes. Entries that went over budget were invalidated. Entries that spent the right amount of money but didn’t fill their rosters were allowed. But the errors were generally fixable after a little work, and not a problem.

What became a problem was that every entry was different. Some included first and last names, some just last names. Some included the +1 price. Some included the draft price (but were budgeted with the extra dollars). Some last names have Jr. after them, other times the same player didn’t have that. Sometimes J.J. had periods, sometimes it didn’t. The variation was breathtaking.

And I didn’t have all summer to fix things up. So the project was picked up in May, resumed at mid-season, struggled on through the end of July, then put on hold until this past week, when I finally wrassled it to the ground. I think. I found an error in the ERA rankings this morning, so we may not be done yet.

We also have a mixed auction standings based on BA, not OBP. It shouldn’t be too horrible to fix that, but I wasn’t going to complete it today and I wanted to get these results out now that they’re otherwise complete. I hope.

Please take a close look at the results, the formulas, the lookups. I think I’ve got it all right now, but I’m batter and bruised enough by this process to make no promises. We’ll have it right by the time we hand out the awards, but until then we’re all working together to get correct. Thanks for your patience.

Tout Warriors Glenn Colton and Rick Wolf lead the pack with their draft day team, which hasn’t been able to hold off Larry Schechter in the race for the TW-AL crown. Andre Pappas is our civilian leader so far.

Tout Warrior Todd Zola is in a dogfight to unseat Tristan Cockcroft in Tout NL, but in Doubt Wars he’s seventh with his league-best draft day squad. Jeremy Pelletier has a commanding lead overall.

Tout Warrior Paul Singman has the leading draft day roster in Tout Mixed Auction, but we’ll hold off comparing him to the challengers until after we get the OBP glitch fixed. Right now Tim George has the lead. 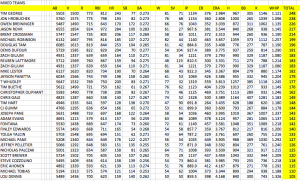