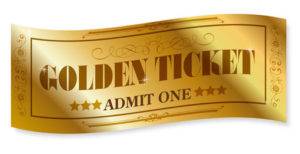 The first Period of Tout Daily by RTSports.com is done, and three golden tickets to the contest finals have been awarded to Brian Walton, Rob Leibowitz, and Patrick Mayo.

No surprises there, as these three were the leaders after Week 3 of the contest as well, though Mayo made it interesting, finishing 39th of 40 teams in Week 4. The stumble dropped him from first to third, but he still takes home a ticket.

Fifteen ticket holders will compete on August 26th for the title of Tout Daily champion.

You can view the leaderboard here. 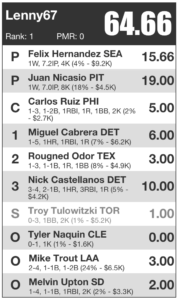 Melnick’s team (click image to enlarge) was built on strong pitching performances from pitcher of the day Juan Nicasio and King Felix Hernandez. His big hitters, Miguel Cabrera and Mike Trout came up meh, but Nick Castellanos had a strong day and the rest of Lenny’s team produced enough points to win the week.

The week’s second place finisher, Jeff Erickson, also had Nicasio, as well as 17 point earner Aaron Sanchez, plus a big night from the Mets Yoenis Cespedes.

Other strong pitching performers on the night were Steven Strasburg, Alex Wood, and Steven Matz. Corey Kluber was the other pitcher who led some teams into the Top 10, with 11 points.

On the hitting side, Justin Bour had 17 points, hitting two homers and driving in five runs against Milwaukee. Castellanos and Cespedes were the only other hitters to score 10 points on teams finishing in the Top 10.

It was a night for the pitchers.

For instance, Rob Leibowitz finished the night with 56 points, only 19 of those coming from his hitters. Nicasio and Strasburg were the night’s best pitching combo, with 37 points. That was good enough for sixth place on the week.

Patrick Mayo had 18 points from his hitters, but only 15 from his pitchers (Corey Kluber and Sean Manaea), to finish 39th.

You can play daily fantasy baseball at RTSports.com every day this season, for money in some states and for free everywhere.

One thought on “O Those Golden Tickets: Walton, Leibowitz and Mayo On Train For Tout Daily Finals! Melnick wins week.”