Tout Wars Head 2 Head is different than the other Tout leagues.

In those other leagues, scored Rotisserie style, you look at the standings and you see who is winning and losing.

In Tout Head 2 Head, you have to look at the Head to Head records, in which Brent Hershey is tied with Jeff Zimmerman. 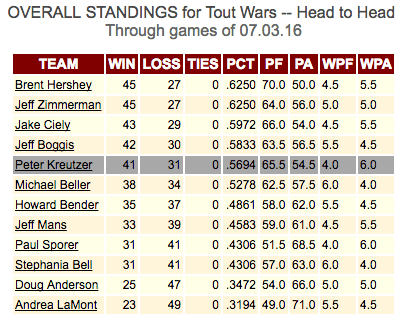 Then, since we’ve reached the halfway point in the season, you need to look at the first half roto standings, which determine the outcome of 12 additional games. (You can see the complete first-half standings here.)

Hershey finished ahead of Zimmerman in the roto standings, so he earns a first-half record of 12-0, while Zimmerman adds an 11-1 mark to his head to head score. Do this for all 12 teams and you have the combined first-half records.

Hershey has a slim lead over Zimmerman, with Peter Kreutzer and Jake Ciely close enough to challenge. Then Michael Beller and Jeff Boggis have room enough to dream.

How do our Tout Wars teams’ records compare to their major league counterparts? In other words, how are they doing?

Brent Hershey equals the Chicago Cubs, and then some.

Peter Kreutzer is the Cleveland Indians.

Jake Ciely is the Washington Nationals.

Jeff Boggis is the Houston Astros.

Howard Bender is the Oakland As.

Doug Anderson is the Atlanta Braves.

Andrea LaMont is the Minnesota Twins.

Good luck in the second half everyone!