As we draw to the end of the penultimate series of the 2017 Tout Head to Head season, Jeff Zimmerman is soundly beating Jeff Boggis, and is poised to go 6-0 for the week.

Brent Hershey’s second-place team is being edged by Peter Kreutzer’s team in both hitting and pitching, and is in danger of going 0-6 for the week. But this has been a see saw battle all the way, so there is certainly a fair chance that Hershey’s team will pull it out. There are four days of major league games left to play.

Here are the current standings for head to head play. 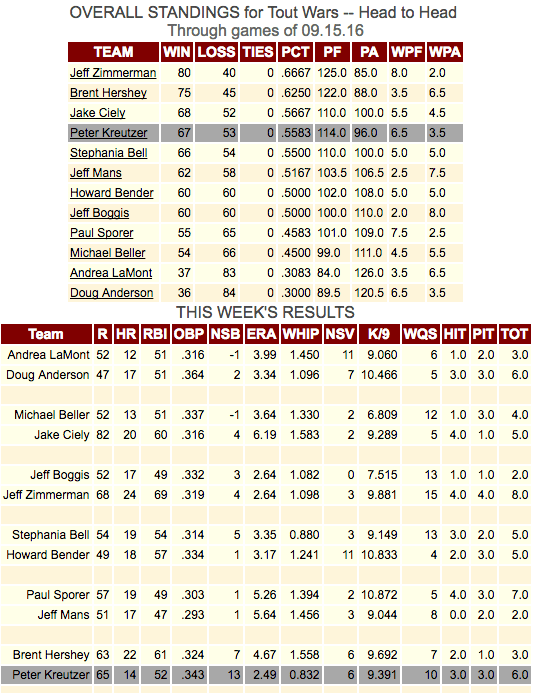 But Tout Daily isn’t just about the head to head. Wins and Losses are also applied based on roto 5×5 standings for the first half, second half, and whole season. We’ve had a hard time introducing this novel system into the automated scoring our stat service provides, but here are the standings for the various periods to date.

The first half standings:

The current second half standings are: 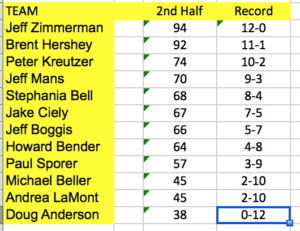 We’ll hold off on the end of season standings until the season is over, but it seems pretty clear that there will be no dramatic surprises. The first and second half Top 3 are the same, if slightly resorted.

And here are the combined first and second-half to date standings: 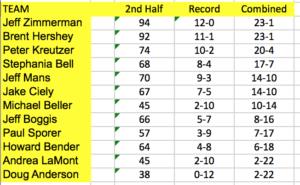 It’s going to take some major reversals for Brent Hershey to overtake Jeff Zimmerman in the race for the first Tout Head to Head crown.