One of the most often asked questions by fantasy and roto players after a draft is, “how did I do?” In the pre-internet days the hardcore player would hunt any and all resources and compile, by hand, a post draft projection to try and get a take on where their team stood against their opponents. Today, fantasy players huddle around a computer screen or smart phone after the draft and instantly have projections. Teams projected at or near the top find their owners relieved and those at or near the bottom often are disappointed. Many regular fantasy players look to projections to see if their team is a “contender or pretender.” The question then that comes to mind is, “can they really do this?” I think they can, to a degree.

I personally like to calculate and see the projections. I have calculated post draft projections as a Tout Wars participant, and since in my house league. That amounts to twenty years of projecting, evaluating, learning, and adjusting. In those years I have found projections, if done correctly, to be eighty percent accurate in determining pretenders and contenders. Those teams projected to be in places one through six have an 80% chance of contending. Those in the seven through twelve slots have an 80% chance of pretending.

I know that not all the touts value projections as much as I do, and perhaps some will question the accuracy of 80%, but this is exactly what Tout Wars was created for. That is to experiment with the many facets of fantasy/rotisserie baseball. So I have chosen to take a close look at the Tout Wars American League and will analyze and follow its progress this season to compare projections vs. actual results.

I mentioned earlier that the projections must be done correctly, here is what I mean. To get the most accurate projections you need several sources. Using only one source leaves you vulnerable to the bias of the prognosticator or the software weighting. The more sources you use, the better. I like to use at least four.

Below are the projections sorted by roto points, and then by rank. I used projections posted on the Tout Wars site by Clay Davenport and Baseball HQ. I added Rotowire and then used CBS dollar values to get a projection based on value, since it is a current trend. I then converted the projected value to points. 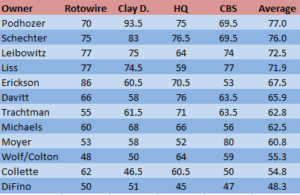 Based on these numbers we have our contenders and pretenders in A.L. Tout. I will follow the standings during the season and will have updates as we look to see who will be 2017 A.L. Tout champion!