Rookies dominated the top five spots in this week’s Mixed League FAAB results.Â  Fred Zinkie reveals the players that were targeted by the owners near the top of the standings!

The Mixed League owners didn’t wait until the trade deadline to spend some serious cash!Â  Find out who paid for hot names like Mujica, Matsui, Cobb and Chisenhall.

Pitchers Sean Marshall, Bronson Arroyo and Jeff Niemann were the most coveted players in a light week of bidding in the Mixed League.

Fred Zinkie wraps up a busy week of bidding in the Mixed League. 26 players were added to rosters, more than we have seen in several weeks!

Fred Zinkie’s Mixed League FAAB recap – to find out which players were added to rosters on the holiday weekend click HERE.

wow. what a game #163. throughout it, mike and i were texting one another with possibilities, thoughts, highs, and lows. not to mention rick wolfe sent me a note noting that though i was in first, that there were a number of variables that could rattle the statistical house of cards and send my team tumbling below mike’s.

but, rick porcello pitched well enough, and jason kubel belted a homer to secure third in that category for me, and in the end, amazingly, my team prevailed.

but, not without a serious fight. mike forced me to keep pressing hard all season, something essential to win any league.

and, well, mike plays as well as the two best players i know: jason grey and tony blengino (though tony retired from fantasy when he started working for the brewers a few years back).

not to mention ron, who came out of nowhere to threaten my peace.

i am still shaking my head with some kind of disbelief that i won, but, there are the standings, proving i did.

what a year, capped by that amazing twins tigers game.

in closing, thanks for following us here. thx to mike and ron for forcing me to play my hardest. and, of course, thx to monsieur peter kreutzer who was our SWAT and who organized and managed the web site here.

see you all next year (and don’t forget to log into creativesports.com, the little site that grabbed two tout and two nfbc titles this year!)

man, what a day i had yesterday.

i got back from a guitar lesson, in time to watch the athletics game while tracking the rangers, as i had saunders and feldman pitching. i knew that being tied with dean for wins, i needed to convert one to be able to hang onto a tie or finish first in tout.

as is my wont, i don’t run to the computer first thing when i get home. i try to exercise a little discipline and self control.

so, i made some lunch and i let jazzy and pavi out and opened the back door for them so they could either watch with me, or lie on the warm sun-baked bricks in the back yard as the afternoon passed.

when i did log in i was shocked to see that arod, jd drew, and jason kubel all already had two-homer games, and i was just two behind ron.

more amazingly, carl pavano took the ball with three days rest and had left with a lead and seven whiffs, giving me ostensibly a win sans feldman/saunders and putting me just seven whiffs behind sam with both my starters yet to pitch.

more amazingly, brad kilby, whom i picked up the sunday before to replace justin masterson, was starting for oakland making my whiff chore more attianable.

and, at 2:12, pm, yesterday, as michael cuddyer homered to tie me with ron, scott feldman logged a whiff that tied me with sam. those two achievements negated the need for my whip to stay lower than matt berry’s, and, well, one strikeout later i had the lead.

now, it is iffy. mike has already pointed out all the directions in which things can go right/wrong, depending upon.

but, i also know a serious pitching meltdown in a game like this is unlikely simply because a manager will not allow a game to get away like that.

still, yesterday john mcdonald homered, and if he can, so can nick punto.

either way, eight homers on the final day of the season with a 18 RBI, a pair of wins, and 17 whiffs is pretty sweet.

not to mention mewelde moore tossing a td pass for two of my teams: something as unexpected as 8 dingers.

like i said, what a day i had yesterday.

If you haven’t heard about Lawr’s epic power display yesterday you should. His team had 16 hits and 8 of them were dingers which got him an improbable half point from Ron in HR. He currently holds a you guessed it half point lead over me with the play in game tomorrow. By no means is this the only reason Lawr would win, this is a season long games and there have peaks and valleys for both of us that would take weeks to write about, but we are fascinated with last days and amazing or disgusting performances. I may be missing some scenarios but I had to stop and move on.

Couple of things could go both our ways. On the surface

Porcello getting rocked really helps me, Iâ€™m 0.02 back of a half point in ERA

Guerrier getting a win beyond huge, that would get me 0.5 back or for some reason Edwin Jackson with a weird vulture win.

Moyer not getting a steal from Cabrera or Harris. I lead him in steals by 1.

Lawr not getting a homer from Granderson, Cuddyer or Kubel. Granderson will probably lead off with a homer. Imagine this, if Punto homers for Ron and Lawr gets non from the players above we drop back into a tie in theory. 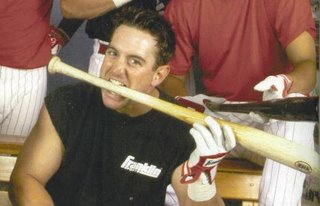 Nathan getting roughed up enough to drop Lawr in Whip.

A few of these combos gets it to a tie or maybe even a win. Possible……………Siano