Heading into the final seven days of this Tout Wars season, multi time former champion Fred Zinkie had a one-point lead over Zach Steinhorn. Now, as we enter the last three days, Steinhorn leads Zinkie by four. The Standings: 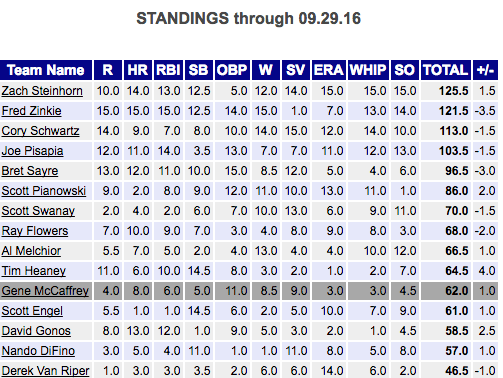 The key battle is in stolen bases, where Steinhorn caught up with Zinkie this week. The two are tied, with 142, two ahead of Nando DiFino and three ahead of Bret Sayre.

Another race in which they’re fighting for the same points is strikeouts, where Steinhorn is five ahead of Zinkie. This might not be quite so close as it looks, since Steinhorn has eight starters this weekend, while Zinkie has only five.

The rest of the board looks pretty set for Zinkie. He’s lost two points in ERA since this past Monday, but is .04 points behind Nando DiFino and .07 behind Ray Flowers in that category. Could he regain those? Sure, but it isn’t likely.

The situation is much more fluid for Steinhorn, who could gain or lose one point in Runs, lose a point in RBI, gain a point in OBP, giving him a potential +2.5 and -3.5 in the hitting categories.

Steinhorn is also two saves ahead of Scott Swanay, which perhaps leaves him vulnerable to the loss of a half point. He’s got one closer (Britton), while Swanay has three (Ramos, Melancon, Bailey).