Going into the final three days of the 2016 season, three Touts are battling for first place in Tout NL, separated by just three and a half points. The Standings: 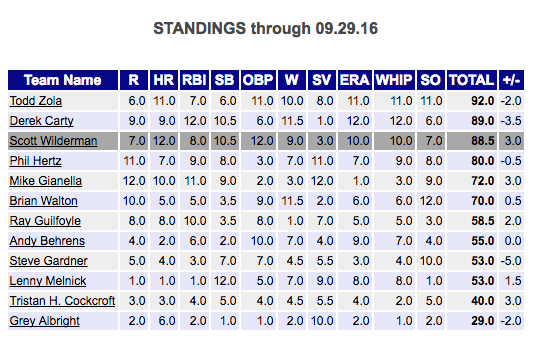 We took a look at how many points were in play for the three teams this weekend.

On the hitting side:

Zola could gain a point in Runs, Home Runs, and On Base Percentage, and has one point to lose in OBP. (+3/-1)

On the pitching side:

Zola can gain one point in WHIP and can lose one point in Wins and Strikeouts, and perhaps lose half a point in Saves. He has three starts left, and the guy who is chasing him in strikeouts, Steve Gardner, has only two. (+1/-2.5)

Wilderman can gain one point in Wins and one in Strikeouts, and could lose points in ERA, WHIP, and Strikeouts. He has five starts left and is three Strikeouts behind Phil Hertz, who has only three starts left. (+2/-3)

Put it all together:

While anything can happen the final weekend, games can be cancelled and not made up because of the weather, or a scheduled starter might no make a start (or make an abbreviated start) because of the coming playoffs, it appears that Zola doesn’t have a big lead but is in a strong position. Still, if he falters he is vulnerable if either Carty or Wilderman has a good final weekend.