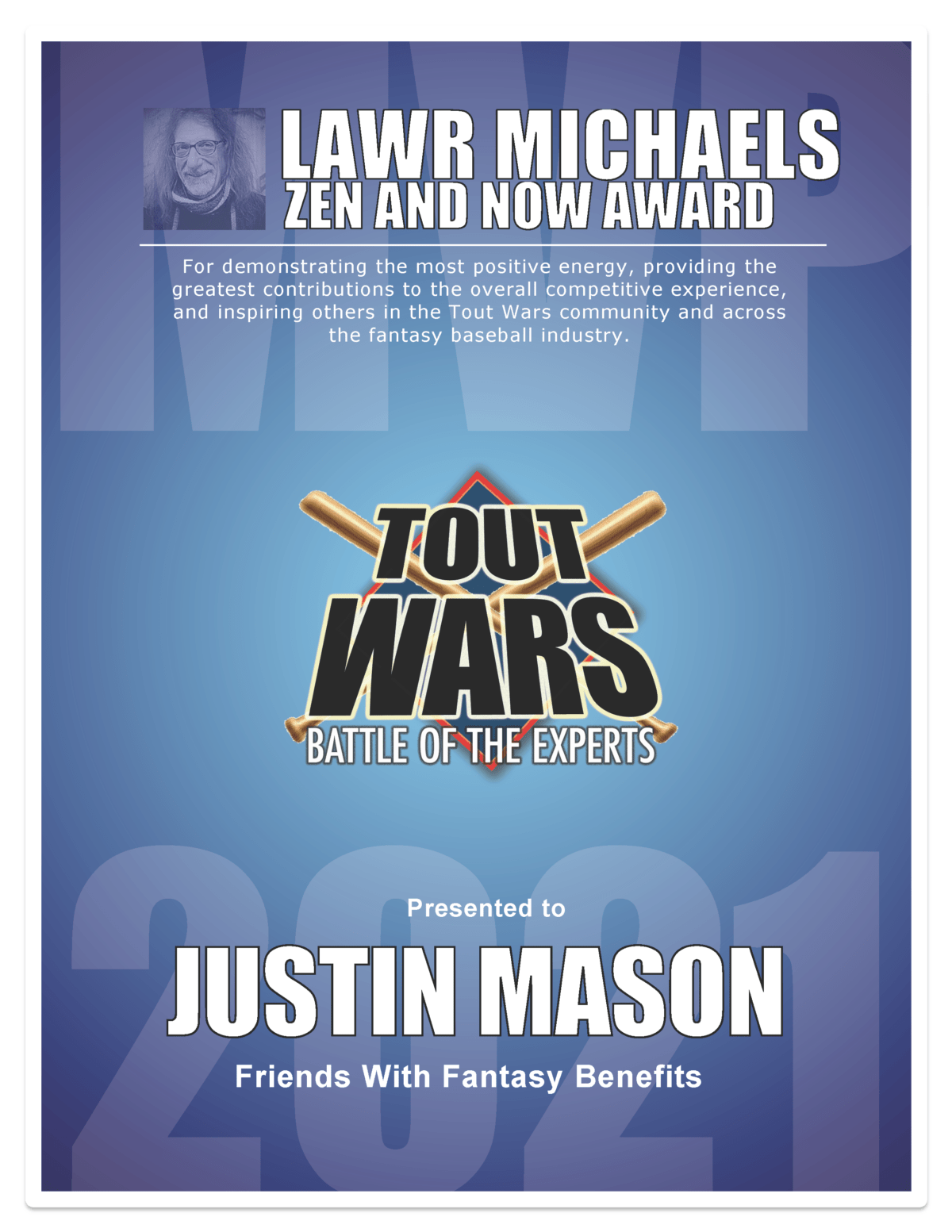 It’s been over three years since we lost Lawr Michaels, and the fantasy industry lost a good part of its heart and soul. Lawr always reminded us that Tout Wars was all about community.

So two years ago, we started the Lawr Michaels Zen and Now award to honor a Tout who exhibited Lawr’s most valuable qualities – demonstrating the most positive energy, providing the greatest contributions to the overall competitive experience, and inspiring others in the Tout Wars community and across the fantasy baseball industry.

Our previous two honored recipients of this award have been Todd Zola and Rick Wolf.

This year’s award winner is Justin Mason, who has taken the concept of “community” to the extreme. The competition he started – The Great Fantasy Baseball Invitational – draws hundreds of fantasy baseball content providers each year. The owner roster includes everyone from long-time industry veterans to rookies, and establishes a playing field that fosters a higher level competitive experience for the industry’s newer talent.

TGFBI has become a great way for those of us who are fantasy baseball vets to pay it forward. Given the explosion of writers, analysts, podcasters, and generally smart people contributing content these days, Justin’s role in helping to grow this industry can’t be underestimated.

In the words of one of his nominators: “Justin’s work is a perfect example of the sense of spirit, community, and camaraderie embodied by Lawr Michaels.”

It is my great honor and privilege to present this year’s Lawr Michaels Zen and Now Award to Justin Mason of Friends with Fantasy Benefits.

Here are some of the Touts’ nominating Justin:

Justin runs the TGFBI leagues and does a great job of being inclusive in doing so. He also writes for Fangraphs and the Friends with Fantasy Benefits site. He’s an all-around good guy in my opinion and is deserving of recognition for the way he promotes the fantasy business.

In addition to creating a league that brings together a very large portion of the fantasy baseball community (TGFBI), Justin raised more than $6,000 for Meals on Wheels with his Podapalozza event back in April. Without a doubt, he’s one of the most positive people in our community, and one who constantly demonstrates the values that were a priority to Lawr.

Justin Mason’s The Great Fantasy Baseball Invitational is a perfect example of the sense of spirit, community, and camaraderie embodied by Lawr Michaels. A competition among veterans, fledgling newbies, and everyone in between is a great way for some of the established mainstays to pay it forward, much the way it was done for them. Further, Justin’s own personable nature carried over onto social media where there were spirited discussions about the TGFBI from February through September, a rarity in the fantasy baseball realm as football talk dominates after the All-Star break. Justin’s development and administration of the TGFBI warrants strong consideration for the Lawr Michaels Zen and Now Award.