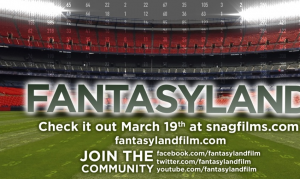 The wait is nearly over, with the announcement that Fantasyland, the movie based on Sam Walker’s bestselling book about Tout Wars, will premiere at snagfilms.com on March 19th, just in time for the 2010 Tout Wars drafts. So get the word out. Jed Latkin stars in Fantasyland.