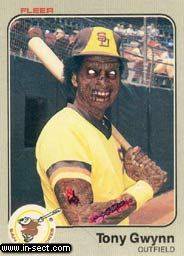 Though there is no money on the line in professional expert leagues such as Tout Wars, pride, reputation and bragging rights are significant motivating factors. In fact, some might argue that it is more gratifying to beat the best of the best in a fantasy baseball league than winning your local league and taking home a $2,500 prize. I would tend to agree with this. Given this assumption, one would expect that the industry vets lucky enough to be invited to participate in a prestigious league like Tout Wars would be active all season long. Unfortunately, in the inaugural Tout Wars mixed draft league, one owner has left his team for dead. Aside from leaving three injured players on his active roster for several weeks, this owner has not made a transaction of any kind (FAAB or activate/reserve) since the end of April. Quite honestly, this shocks me. While this type of behavior happens all the time in more casual leagues, I cannot comprehend why an owner who is well known in the fantasy industry would completely abandon his team just a month into the season.

A couple of weeks ago, I was browsing my competitors’ teams searching for trade opportunities when I noticed this owner’s team starting those aforementioned injured players. At first, I thought, okay maybe it’s just been a week and there were some extenuating circumstances that caused this owner to leave the trio of disabled players in his lineup. So I decided to then check out his year to date transactions, and that’s when I realized that he hasn’t been playing since the end of April. I immediately notified commissioner Peter Kreutzer explaining the situation. I have been the commissioner of my own local league for over 10 years and so have unfortunately had experience dealing with this issue. The question that now arises is whether we should just leave the team as is or develop some sort of system to ensure the dead team has a healthy lineup each week.

Of course, the downside of leaving the team the way it currently stands is that the other fantasy teams now have an opportunity to gain free and easy points in the standings in the counting stat categories. It is rare that a team will make it through the season without multiple injuries. Without any replacements being added, the dead owner’s team is going to be taking zeroes in several lineup slots, killing his chances of accumulating the various stats and competing with other teams. Furthermore, the players on this owner’s team are essentially eliminated from the player pool. Want to trade for an underperforming Jason Heyward or Matt Cain (examples)? Tough luck, he’s on the dead team.

So given the undesirable side effects caused by leaving a dead team’s roster alone, I developed a system that I have used a couple of times in my local league, which I described to Peter. The goal of the system is simply to ensure the team has a fully healthy active roster each week, with no concern being paid to the actual quality of the players. These are the steps that I follow:

1) Check for any injured players currently on an active roster; contact owner for an explanation and if no response, consider the team dead.

2) If the team has a replacement for the injured player on his bench, activate that player. If he has more than one option, activate the player started in the highest percentage of leagues. If the start percentage rate isn’t available, then activate the player currently ranked highest by either the site’s ranking system or another agreed upon ranking system or the player performing best season to date based on a subjective determination. The goal here is to makes the best attempt to mirror what the owner would do if he was actually paying attention.

3) If no replacement is found on the dead team’s bench, then a free agent must be acquired. After the FAAB process has run as normal, then depending on which data is available on the league site, add the player with the highest ownership percentage or with the highest season to date ranking at the position needed. Since this process is done after FAAB has run, there is no worry about other owners also bidding on the same player as the dead team. So the replacement gets added to the dead team for $0 and no one can complain since they were not outbid for the player.

While there is clearly no perfect method to handle this situation, I think the process I described above is the fairest and certainly a better way to maintain the integrity of the league than allowing a team to field multiple injured players and dramatically affect the standings. Unfortunately, Peter advised me of the following:

“The LLC consensus is that it is inappropriate to take action, that the remedy for a player who doesn’t play is to not be invited the next year and to let his team float for this year. We do have a precedent for this.”

I obviously disagree with the decision, but would love to hear your thoughts on handling an inactive team in this type of league.

Excellent list of the bids, accompanied by interesting commentary about them by the Mastersball gang.

Ron Shandler finds some Oldies but maybe goodies on this week’s AL Waiver Wire, in his USA Today column.

Gene sent out this note: “I have one closer (Balfour), and I am entertaining the notion of dumping Saves. Any one of you can help me with this decision by offering a hitter or starting pitcher of comparable value. I know that nobody wants to witness the spectacle of my indecision; you are sensitive souls. Thank you for your consideration.”

Perry responded with the best player.

Gene has one point in Saves with one closer. He could have added another, but that would have cost him a decent player and likely points in other categories.

Perry has gotten 43 innings of excellent ERA out of Detwiler, who has allowed a fair number of baserunners and shouldn’t be expected to continue with a >3.00 ERA, so dealing him has an element of sell high about it.

Gene was able to deal his near-worthless (t0-him) reliever for one of the more beloved young pitchers this year. As a starter Detwiler helps in strikeouts only a little, since he isn’t a K/9 guy, but Gene is in good position to gain with any increase in Ks. Detwiler should also help in Wins, even if he is not a plus in ERA and WHIP. Meanwhile Perry, who is in the middle of the pack in Saves, has a chance to gain 5.5 easy points by adding a third closer (joining Holland and League). Perry’s risk is in strikeouts, where he could quickly lose four or five points. Gene stands to gain a few more points than Perry in the deal, but any points the frontrunner (Van Hook) could prove decisive.

Phil Hertz had a piece in USA Today this week about how you can throw draft day prices out the window once the season starts, that once the season starts values change because draft prices sometimes reflect draft conditions rather than player value, and a player’s value on his fantasy team changes in context depending on how the categories in his league shake out. While Phil’s certainly right that it isn’t fair to judge his recent NL Tout trade of Ike Davis ($25) for Jeff Samardzija ($14) based on the prices, figuring out what is going on in the league and how teams did, in this case, on draft day, Â makes those prices pertinent. So how much did Balfour and Detwiler cost? Gene took Balfour in the 13th round, while Detwiler lasted until the 19th. In the Tout Mixed Auction Balfour was $11, while Detwiler was a reserve pick. I guess Gene would agree with Phil.

Hosted by Jason Collette. This isn’t the prettiest presentation, but it’s easy to search.

On March 11th Tout Wars Mixed Draft will launch its inaugural season with an online windshield wiper draft. The league will play with the same rules as Tout Mixed Auction, apart from the method of player acquisition.

Follow the draft here at toutwars.com in the live blog and via live spreadsheet. (Links coming.) And the races all season long on this website and following the links to onRoto.com.

For the roster of excellent owners and the draft order visit the TOUTS Page here at Toutwars.com.